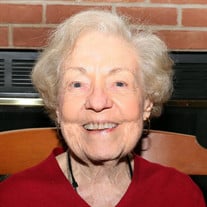 Mrs. "Wendy" Zeigler, lived in Columbia, South Carolina. Mrs. Zeigler was born on January 19, 1921 in Stafford County, Kansas to the late Anna Moeckel Wendelburg and Henry Wendelburg. She gave her heart to Jesus Christ at the early age of 9 years old and was a member of Shandon Baptist Church in Columbia and a former long-standing member of First Baptist Church in Walterboro, SC. After attending Bethany College in Lindsborg, Kansas, Mrs. Zeigler attended Grace Hospital School of Nursing in Hutchinson, Kansas. At 21, she recalled hearing the announcement of the attack on Pearl Harbor. She had one brother too old and one brother too young to join the military. She stated she thought it was “her duty” to join and 7 months later her military life began. Mrs. Zeigler went on to proudly serve as 1st Lieutenant in the United States Army arriving on Utah Beach, the westernmost beach of the five landing areas of the Normandy Invasion of World War II, two months after the D-Day invasions. She served in both the European and South Pacific theaters. After returning home, her professional career as a nurse continued as she dedicated herself to the health and welfare of infants and children of Colleton County, SC. During her 23 years of service at the Department of Health and Environmental Services, she received many awards including Nurse of the Year and retired as supervisor in 1986. Alongside her professional responsibilities, Wendy was a devoted wife and mother, Girl Scout Leader, volunteer for the American Red Cross and nursery worker for the 1st Baptist Church in Walterboro. She was a member of the Garden Club, Supper Club and Bridge Club in Walterboro. Both she and her husband Wilbur were members of the Gamecock Club and enthusiastic football fans of the University of South Carolina. Mrs. Zeigler was recognized as one of the first 100 veterans at the inaugural South Carolina Honor Flight to the nation's capital to visit the World War II Memorial. In 2008, she was featured in a front-page article in The State newspaper, profiling local veterans in which she so vividly described the devastations of war as she experienced as a nurse abroad. She will be remembered for the example she set for women to be both strong and compassionate, dedicated and committed to the values of God and family. She was preceded in death by her devoted husband Wilbur, to whom she was married for 64 years. She is survived by her daughter, Barbara Zeigler Powell and husband Joe and daughter Jane Zeigler Aldridge and husband Al, of Columbia, granddaughter, Jenny Aldridge Kerr and husband Tony of Columbia, grandson, Andrew Harold Aldridge and wife Ginger of Charlotte, NC, and five great grandchildren Joshua and Matthew Kerr of Columbia and Erin, Allyson and Kathryn Riley of Charlotte, North Carolina. Additional survivors include two sisters, Dr. Norma Wendelburg of Hutchinson, Kansas and Betty Wendelburg Minnick and husband Jerome of Ottawa, Kansas, sister-in-laws Zelma Lee Wendelburg, Evangeline Wendelburg, both of Stafford Kansas and Eunice Wendelburg of Larned Kansas, and J. H. Zeigler of Orangeburg, SC, as well as many devoted nieces and nephews. Others who preceded her in death include her brothers Edwin of Tribune Ka., Albert and Robert Wendelburg of Stafford Kansas, brothers-in-law and sisters in law, Eugene and Genevieve Zeigler of North SC and Walter and Carolyn Zeigler of Columbia, SC and Almeda Zeigler of Orangeburg, SC and Thelma Zeigler and Meadows Godwin of Orangeburg, SC. A graveside funeral service to celebrate her life will be held on Friday, October 23, 2015, at 2:00 pm on at Bull Swamp Baptist Church Cemetery, 4408 Redmond Mill Road, North, South Carolina, 29112 with Rev. Lane Bembenek and Rev. Jerry Long officiating. Culler-McAlhany Funeral Home, ([email protected]" title="Click to open in a new window or tab" target="_blank" rel="nofollow noopener">[email protected]) 4541 Savannah Highway, North, South Carolina, 29112 is assisting the family. Memorials may be made to the American Cancer Society and Shandon Baptist Church 5250 Forest Dr Columbia SC 29206 The family wants to thank the Doctors Nurses, Caris Hospice and Right at Home Caregivers for her care and loving concerns during her life.

Mrs. "Wendy" Zeigler, lived in Columbia, South Carolina. Mrs. Zeigler was born on January 19, 1921 in Stafford County, Kansas to the late Anna Moeckel Wendelburg and Henry Wendelburg. She gave her heart to Jesus Christ at the early age of... View Obituary & Service Information

The family of Anna Bell "Wendy" Wendelburg Zeigler created this Life Tributes page to make it easy to share your memories.

Send flowers to the Zeigler family.