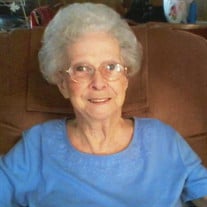 Blanche Smith Sharpe Hoffman, 86, of Swansea, SC, died Thursday, June 18, 2015. She will be greatly missed by all who knew her and whom she dearly loved. Heaven has gained a beautiful angel. Funeral services will be held at 4:00 PM, Sunday, June 21, 2015 at St. Paul Pentecostal Holiness Church in Swansea with Rev. H. Larry Jones officiating. Burial will be in Sardis Baptist Church Cemetery. The casket will be placed in the church at 3:00 PM, one hour before the service. Pallbearers will be Kevin Berry, Clint Sharpe, Brian Sharpe, Adam Boozer, Kevin Hoffman, Lee Hoffman, David Hoffman and Chad Hoffman. Mrs. Hoffman was born in West Columbia on February 22, 1929, the daughter of Theodore Clifton and Tallitha Cuma Lucas Smith. She retired as a bank teller with First Citizens Bank and was a member of St. Paul Pentecostal Holiness Church in Swansea, SC and a former member of First Baptist Church in West Columbia. She loved to sing in the church choir. She and Thomas sang with the Singspirations for 10 years. She loved the music of The Gaithers and teaching children about Jesus. She enjoyed watching sports on television, especially the Carolina Gamecocks and Atlanta Braves. She was first married to Boyd Sharpe and her second husband was Thomas Hoffman, both of whom are predeceased. Survivors include her daughter Debbie Berry (Larry) of Cayce; stepdaughter, Tommi Hutto (Gene) of Swansea; stepsons, Jimmy Hoffman (Debra) and Kenny Hoffman, both of Swansea. Also surviving are fifteen grandchildren and eighteen great-grandchildren and a number of nieces and nephews. She was predeceased by all her brothers and sisters, an infant brother, Maxie, brothers, Woodrow “Curly” Smith (Mary), Ernest Smith (Tillie); sisters, Ophelia “Phoebe” Fallaw (Milo), a baby sister that died at birth, Elda Hook (Wilbur), Mary Bachman (Berley) and Lillian Boles. She was also predeceased by her son, Ronnie Sharpe and a stepson, Michael Hoffman. The family will receive friends from 6:00 until 8:00 PM, Saturday, June 20, 2015 at Culler-McAlhany Funeral Home in North (www.mcalhanyfuneralhome.com) and other times at the home located at 323 Tickle Weed Road, Swansea, SC 29160. The family wishes to thank her caregivers Earline, Eva, Sabrina and Marilyn as well as Tri-County Hospice for their loving and tender care over the last two years. Memorials may be made to St. Paul Pentecostal Holiness Church, P. O. Box 219, Swansea, SC 29160.

Blanche Smith Sharpe Hoffman, 86, of Swansea, SC, died Thursday, June 18, 2015. She will be greatly missed by all who knew her and whom she dearly loved. Heaven has gained a beautiful angel. Funeral services will be held at 4:00 PM, Sunday,... View Obituary & Service Information

The family of Blanche Smith Sharpe Hoffman created this Life Tributes page to make it easy to share your memories.

Send flowers to the Hoffman family.