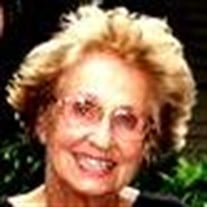 After a long and blessed life of 95 years, Coan Turner Culler passed into the realm of angels on the first day of spring, March 21, 2016. Born at the Orangeburg Hospital on June 2 1920, she was the only child of late Walter Ernest Turner and late Mabel McCormick Turner. Mrs. Culler was preceded in death by her husband, H. Graham Culler, daughter Mabel and son Harry Graham, Jr. Survivors include four children: Philip Alan Culler, Robin Culler, Mark Edwin Culler, Barbara Kiser and their spouses, Suzanne Phillips, Frank DeBolt, and Terry Keiser. Coan had many beloved grandchildren (Alan, Megan, Martine, and Bryan; David, Laura, and Jason; Lee, Steven, Jeannie, Eric; Kate, Kori, Zack, Graham, Michael, and Tiffany) and great-grandchildren, nieces and nephews. Coan Culler leaves behind a legacy of good deeds, fine art, and was widely acclaimed as an excellent steward of the earth. Coan was blessed from her earliest years, able to live and play in the fields of the Lord. The Turner family farm was a land grant from King George, had had been managed by her family for many subsequent generations. Coan Cullers’ home stands as a testament to the people who lived off the land for many years. Coan truly loved the ground she and her ancestors had trod, and felt duty bound to keep the land prosperous and fruitful for future generations of Culler descendants. Coan was brave and bold as a young woman, and was an amazing artist. After studying art at Converse College and the Maryland Institute of Art in Baltimore, she returned home with a passion that went beyond her canvases. She and a dear friend cofounded Orangeburg League of Arts, which in turn led to staging shows, educational events and community workshops. But as evidenced in her watercolors and oils, Coan’s artistic muse was found in 1800 era photographs and historically significant landscapes--inspiration for wonderful art still on exhibit. Ms. Cullers’ artistic genius is alive and intricately woven into the lives of her family. Coan was so happy that the family shared her love of the arts, and would joyfully watch the children explore the stacks of canvases that lined her walls, books that lined the shelves in the library, and artifacts that filled her home. For the past 20 or so years, people in the community knew Coan as the BlueBerry Lady, and until just a few years ago Mrs. Culler could be seen still driving her new red tractor along the many rows of bushes, tasting and tending the Tift Blue or Climax berries. Locals would eagerly watch the local papers for the green light to “come and pick your own.” Customers from across the deep southern states were welcomed into her domain, handed a bucket (or ten) to fill to the brim. After a hot day of picking and a bit of gossip, her guests were handed a glass of lemonade, complimentary blueberry recipes and sent home to enjoy the fruits of Coan Culler’s labor. On Saturday April 2, 2016 at 2p.m. the family will have a memorial service at Hebron Southern Methodist Church near Livingston SC. Memorials may be made to Hebron Southern Methodist Cemetery Fund in care of N. Pou, Jr. 753 Pond Bluff Rd, North South Carolina, 29112. The family would also like to express their thanks to Jolly Acres Health Care Center for their services to the Culler family. Culler-McAlhany Funeral Home in North (www.mcalhanyfunerlhome.com) is assisting the family with arrangements.

After a long and blessed life of 95 years, Coan Turner Culler passed into the realm of angels on the first day of spring, March 21, 2016. Born at the Orangeburg Hospital on June 2 1920, she was the only child of late Walter Ernest Turner and... View Obituary & Service Information

The family of Coan Turner Culler created this Life Tributes page to make it easy to share your memories.

After a long and blessed life of 95 years, Coan Turner Culler...

Send flowers to the Culler family.