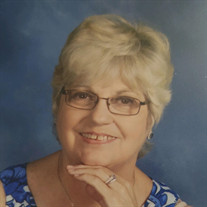 Cynthia W. Amaker, 70, of North, passed away on Saturday, October 17, 2020, after a battle with breast cancer. Funeral services will be held at 2 p.m. Thursday, October 22, 2020, at First Baptist Church of North, with the Rev. Sean McElrath and the Rev. Brett Mask officiating. Burial will follow at Riverside Cemetery. The family will receive friends from 1 to 2 p.m. prior to the service. Social distancing will be practiced. Cindy was the daughter of the late Dale Odom White and Richard White. Cindy's mother raised her and her siblings as a single mother, instilling values in Cindy that she would carry with her for the rest of her life: to be strong, hard-working and to love unconditionally. Cindy met the love of her life, Barry, while they were in high school, and after Barry finished his service in Vietnam, they married and worked hard to make a home to raise their family. Cindy, a cosmetology graduate, opened her own salon before moving into fashion and retail. She worked for years as the Factory Outlet fashion consultant and store manager. She later managed fashion stores such as Affordables and Cato's before retiring. She was a devout Christian and a member of First Baptist Church of North, where she was a member of the Will Connelly Sunday School Class and sang in the choir. Cindy was also known for her baking and sewing. She would take sweets to many friends, family and fellow church members. She also had a talent for crochet. If you received a baby blanket from Cindy, you were loved. Cindy had many titles: sister, wife, mother but her favorite title was that of MiMi. When her grandson Cameron was born, he became the light of her life and she spoiled him terribly. He was loved. Survivors include a son, Charles “Timmy” Amaker of North; a daughter Kristin (Ron) Coker of Cope; grandson, Cameron of Cope; two sisters, Linda (Gene) Brandon and Bina (Bill) Wylie; a brother, Butch (Debora) Whetstone; and special lifelong friend, Linda Adams; and a number of nieces and nephews. She was predeceased by her husband Barry Amaker and sister Faye Livingston. Special thanks to the staff of Magnolia Place and Grove Park Pharmacy for their care. Memorials may be made to First Baptist Church of North, P.O. Box 189, North, SC 29112; or to the American Cancer Society, 200 Center Point Circle, Columbia, S. C. 29210. A message of condolence may be sent to the family by visiting www.mcalhanyfuneralhome.com. Culler-McAlhany Funeral Home is assisting the family.

Cynthia W. Amaker, 70, of North, passed away on Saturday, October 17, 2020, after a battle with breast cancer. Funeral services will be held at 2 p.m. Thursday, October 22, 2020, at First Baptist Church of North, with the Rev. Sean McElrath... View Obituary & Service Information

The family of Mrs Cynthia (Cindy) Amaker created this Life Tributes page to make it easy to share your memories.

Cynthia W. Amaker, 70, of North, passed away on Saturday, October...

Send flowers to the Amaker family.