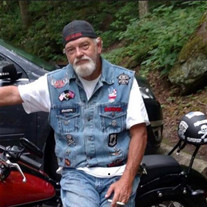 Mr. Edward Eugene Hutto, 64, of Swansea, SC, passed away at his residence Saturday, December 8, 2018. Funeral services will be held at 1:00 PM, Tuesday, December 11, 2018, at Faith Baptist Church with Rev. Terry Wilder and Rev. Stuart Pritchett officiating. The casket will be placed in the church one hour before the service. Burial will be in Melrose Cemetery. Mr. Hutto was a member and former Junior Deacon at Antioch Baptist Church and attended Faith Baptist Church. At the request of our Honey, he would be honored for you to join him on his final ride on your bike and dressed in jeans, if you like. Proud to serve as pallbearers are Danny Estep, David Zeigler, Charles “Pompy” Jeffcoat, Rusty Gunter, Richard Dykes, LaVern Dykes, Larry Williamson, Terry Hutto and Kendall Furtick. Mr. Hutto was born in Aiken, SC, a son of the late James Edward and Wiley Rose Hooker-Martin Hutto. He was retired after 39 years of service as a Senior Draftsman with SCANA and was a past volunteer fireman at Jumper Station in Swansea. He was a member of several hunting clubs and was an avid lover of hunting, fishing, riding his Harley and spending time in Maggie Valley, NC. One of his loves was restoring antique vehicles of which his pride-and-joy was his 1967 Chevelle. Survivors include his wife, Tommi Denise Hoffman Hutto; sons, James Justin Hutto and partner M.J., William Adam Boozer IV both of Swansea; daughters Ashley LeeAnn Harvey and partner J. R. of Gaston, SC and Sally A. (Michael) Martin of North; sister, Sharon Rose Hutto of Swansea and 4 grandchildren, KayLee GraceAnn Brown, CarLeigh Denise Brown, Michael Brayden Johnston and GraceLeigh Rose Martin. He was predeceased by a brother, Douglas P. Hutto. The family will receive friends from 6:00 PM until 8:00 PM, Monday, December 10, 2018 at Culler-McAlhany Funeral Home (www.mcalhanyfuneralhome.com) of North, SC Special acknowledgement is given to Pathway Hospice and to Donna Goodwin Hicks for the loving way she came day or night and slipped in beside him ever so sweetly, with all the love and compassion in the world, soothing his mind and our nerves. She was truly our angel here on earth and to Alisa, our new-found friend for whom we are forever grateful. Memorials may be made to the youth group of Swansea Baptist Church.

The family of Edward Eugene Hutto created this Life Tributes page to make it easy to share your memories.

Send flowers to the Hutto family.