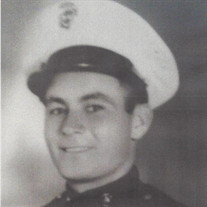 Sergeant Major Shelby McLean Pou, of Neeses, SC died on January 13, 2019 at the age of 100. He was affectionately known as “Bo” by his grandchildren and others close to him. He was born near Livingston, SC, and resided in Neeses for most of his life. A “celebration of life” visitation will be held at Culler-McAlhany Funeral Home in North, SC on Wednesday Jan 23 from 6-8pm. A memorial service and burial will take place on a later date and he will be laid to rest in the Old Hebron Cemetery. Mr. Pou was the son of the late David Newton Pou Sr. and Catherine Elizabeth “Lizzy” Livingston Pou. Survivors include his wife of 11 years,Hazel Flegel Pou of Andrews;his children,Jeri Lynn Williams (Glen) of Colorado Springs, Richard Pou (Zayda) of Summerton, Joye Hallman (Trey Beasley) of Barnwell; Seven grandchildren, Byron Williams (Mandy) of Columbia, Jeff Williams (Lisa) of Chapin, Morgan Huffstetler (Jason) of Bamberg, Jessica Hallman of Charleston, Andrew Hallman of Barnwell, Bryson Hallman of Bamberg, and Gracie Gleaton of Barnwell; Six great-grandchildren, Sean, Kathleen and Dylan Williams of Columbia, Harper Williams of Chapin, and Emma Lynn and Elanor Huffstetler of Bamberg. In addition, a large extended family of grandchildren, great-grandchildren, nieces, and nephews and friends that he cherished. Sergeant Major Pou was a WWII veteran and served in the South Pacific. He enlisted in the Marines and later served in the Army, retiring as a Sergeant Major after 21 years of service. He was a good Soldier, loved his country and serving his country. He was very proud of his service in the Army as a Non-Commissioned Officer and was aware of the opportunities that his service granted him. Following his military retirement he worked as personnel manager at Utica Tool Company and later in life started and operated a successful septic tank business. Shelby was well known for his love of dancing and having a good time with friends and family. His hobbies included farming/gardening, and raising all types of farm animals. He was an accomplished angler, bird, and deer hunter, and shared his passion with his grandchildren and those around him. If he had a choice, he would rather be fishing in the North Edisto River, Chaplin’s Pond, or deer hunting than most other activities. His love of the outdoors lives on in his children, grandchildren and great-grandchildren. He was predeceased by his loving and devoted wife of 52 years, Lynn Mack Pou; his sister, Harrie Howell Camp; and three brothers, Jacob Pou, David Newton “D.N.” Pou and Kirby Pou. He was a life-long member of Hebron Southern Methodist Church. Memorials may be made to the Hebron Cemetery Fund, 363 Wisp Road, Neeses, SC 29107.

Sergeant Major Shelby McLean Pou, of Neeses, SC died on January 13, 2019 at the age of 100. He was affectionately known as &#8220;Bo&#8221; by his grandchildren and others close to him. He was born near Livingston, SC, and resided in Neeses... View Obituary & Service Information

The family of Shelby Mclean Pou created this Life Tributes page to make it easy to share your memories.

Send flowers to the Pou family.