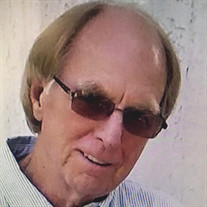 William Joseph “Billy” Wishert, 74 of Springfield, passed away Sunday, September 30, 2018. He was born on April 30, 1944, in Chester, SC, a son of the late Lois Boulware Wishert and Joseph “Joe” Meador Wishert. He moved to North, SC, when he was one week old and was raised on what he called “the greatest street in America”. Billy joined the First Baptist Church of North, SC at a very early age. He was a graduate of North High School where he played baseball and football. After graduating, he worked for Aiken Electric Co-op until 1966. He joined Asplundh Service Co. as a lineman and later served as a foreman over the line crew. In 1978 Billy joined New York Life Insurance Company that began a career of over 30 years and was a career member of NALU. During his career with NYL, he received The National Sales Achievement Award, National Quality Award, Centurian Award, was a member of the Million Dollar Round Table, and a life member of SC Life Leaders. He was also Agent and Rookie of the Year in the Columbia SC General Office. Billy was a people person and loved to see them have a good time. He was instrumental in providing a safe and clean environment where young people could come and mix and mingle, meet other people and dance. Thus, the idea for the “Barn” in North, the “Warehouse” in Salley, and the “Alamo and “B.J.’s” in North came to be. From 1969 until 1983, these places provided some of the best beach and dance bands in the Southeast. Billy founded, owned, and operated GoodLand BarBeQue in Springfield in 2002. He loved his employees who he credited for the huge success GoodLand enjoyed. Due to health reasons, Billy retired in 2008. Billy was a veteran of the U.S. Army, a member of the American Legion Post #78 in North, a former town councilman for the Town of Springfield, and former board member of Jefferson Davis Academy. He loved bass fishing, enjoyed working in the yard, and spending time at Surfside Beach. He is survived by his wife, Betsy Butler Wishert; daughters, Cadra Wishert Menard, Meada Wishert (Brad) Fogle, Reagan Wishert (Michael) Pender, and Whitney Wishert (Carl) Sanders; a step-son, Matt Cody; grandchildren, Beauregard Menard, Theron Menard, Briggs Menard, Mary Tillman Davis, Hampton Davis, Preston McNair, Banks Pender, Harper Sanders, Trace Sanders and Grey Sanders; and step-grandchildren, Carson Fogle, Elliott Fogle, Cate Fogle, and Cade Pender. Funeral services will be held at 2:00 P.M., Wednesday, October 3, 2018 at First Baptist Church of North with Rev. Henry Cooper officiating. The burial will be at Riverside Cemetery in North. The family will receive friends from 6:00-8:00 p.m., Tuesday at Culler-McAlhany Funeral Home (www.mcalhanyfuneralhome.com) in North. In lieu of flowers, memorials made to the First Baptist Church of North RA’s, P.O. Box 189, North, SC 29112 or to the Wounded Warrior Project, P.O. Box 758517, Topeka, Kansas 66675.

The family of William "Billy" Joseph Wishert created this Life Tributes page to make it easy to share your memories.

Send flowers to the Wishert family.