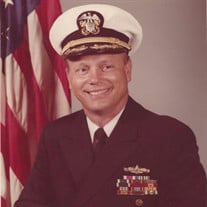 Captain Kenneth G. Clark USN(Retired), 80, of Swansea, died on May 10, 2017 at 1:54PM in his home surrounded by his family and loved ones. He is survived by his loving wife, Joanne Clark, and their two children, Steve (Alicia) Clark and Suzanne (Kevin) Hackett. He loved all of his grandchildren, immensely: Kevin Jr., Andrew, Ali, Arica, Casey, Alana, Hunter, Chandler, and Lani. He is also survived by his older brother, Albert (Caroline) Clark of Littleton, CO, and his older sister Gloria (Michael) El-Batanouny of Sharon, MA, and numerous nieces and nephews. He is predeceased by his parents, Albert and Anna Clark, sister, Gladys Laderwager, brother-in-law, Matthew Laderwager, and brother, Wayne Clark. Services will be held at Antioch Baptist Church, 1477 WE Jeffcoat Road, Gaston, SC on Monday, May 15, 2017 at 2:00pm. Burial with full military honors will be in the church cemetery. The family will receive friends from 6:00-8:00 P.M. on Saturday, May 13, 2017 at Culler-McAlhany Funeral Home (www.mcalhanyfuneralhome.com) in North and also after the service in the church fellowship hall. He faithfully served the Lord at numerous churches, including Faith Baptist Church, Swansea, and Antioch Baptist Church, Gaston, serving as a deacon, and holding many leadership roles. Born September 15, 1936, in Brooklyn, NY, he joined the US Navy in 1954, as a Hospital Corpsman. After receiving an appointment to the US Naval Academy, he graduated in 1960, and continued to serve his country, until his retirement in 1986, after 32 ½ years of service. He held a Master’s Degree from American University in Public Administration (MPA), Comprehensive Fields: Computer Systems and Computer Software (1967). He was a decorated Captain, and having served in many prestigious positions including serving in Viet Nam in 1968 and Captain of the destroyer, USS Hawkins. He then served as the Chairman of the Computer Sciences Department at USNA, returning to his alma mater for three years. He retired in 1986 from the US Navy, and went on to serve in the civilian world, with his extensive leadership skills as Vice President for Information Systems at Andrulis Research Corporation, Cinncinati Bell, and DYNCORPS, and the SC Department of Revenue. His final employment, before fully retiring, he was President of Christ Central Institute, a growing Bible College in Wagener, South Carolina, serving as their first President. He served as Swansea-Gaston School District 4 School Board Member for 4 years and as a Member and of the South Carolina House of Representatives, District 96. Memorials can be made, in lieu of flowers, to the Antioch Baptist Church building fund.

Captain Kenneth G. Clark USN(Retired), 80, of Swansea, died on May 10, 2017 at 1:54PM in his home surrounded by his family and loved ones. He is survived by his loving wife, Joanne Clark, and their two children, Steve (Alicia) Clark and Suzanne... View Obituary & Service Information

The family of Kenneth Clark created this Life Tributes page to make it easy to share your memories.

Send flowers to the Clark family.