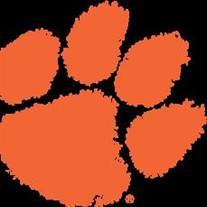 Malachi André Williams, 82, of Swansea, SC passed away on May 4, 2016 in Columbia, SC. Visitation will be at 10:00 am on Monday, May 9, 2016 at Swansea United Methodist Church Fellowship Hall. Funeral services will be held at 11:00 am at Swansea United Methodist Church. Burial will follow at Melrose Cemetery. Arrangements are by Culler-McAlhany Funeral Home (www.mcalhanyfuneralhome.com) in North, SC. Mr. Williams was born to Walter Cleo and Manila Robinson Williams on September 20, 1933. He graduated from Swansea High School and married his high school sweetheart Sally Rast. After High School he served in the Army for two years. He graduated from Clemson University with an Architecture degree and worked as an architect for over 40 years. For over 50 years, Mr. Williams was a member of the IPTAY Club and enjoyed attending all the home Tiger football games. He was very active in the community and church where he was a member of the Swansea United Methodist’s Men’s Club. Subsequent to serving on Swansea Town Council for several years, Mr. Williams served as Mayor of Swansea from 1983-1989. Additionally, he was a member of the Lexington County Planning Commission and Lions’ Club. Mr. Williams enjoyed fishing with his family and flying his airplane he shared with his two brothers Frank and Tom. Mr. Williams is survived by his wife, Sally Rast Williams, daughter, Lisa Hawsey, son Andy (Susan), daughter Angela Eskridge (James), daughter Nancy Sharpe (Jim). Grandchildren: Trent, Kerrie, Zachary, Lauren, Kelli, Madison, Sally, Andrea, and Adam. Great grandchildren: Austen, Landon, Kyleigh, Ashton, Cullen, Gannon, and Kenzly. Pallbearers will be Trent Hawsey, Zachary Sharpe, Clayton Boltin, Earl Brown, Matt Williams, Tad Goodwin. In lieu of flowers, memorials may be given to the Alzheimer’s Association and Swansea United Methodist Church. The family wishes to extend our sincere thanks to the caregivers at The Haven, Colonial Gardens and Lighthouse Hospice.

The family of Malachi Andre Williams created this Life Tributes page to make it easy to share your memories.

Malachi André Williams, 82, of Swansea, SC passed away on May...

Send flowers to the Williams family.