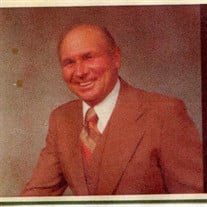 Henry Berry Thomas, Jr., 89, of North, SC, died Thursday, July 30, 2015. Funeral services will be held at 11:00 AM, Monday, August 3, 2015 at Providence Baptist Church, 75 Providence Road, Orangeburg, SC 29118, with Rev. Kimmett Lott officiating. The casket will be placed in the church at 10:00 AM, one hour before the service. Burial will be in the church cemetery. Mr. Thomas was born in North, SC a son of the late Henry Berry Thomas, Sr. and Matilda Harley Thomas. He was a lifelong member of Providence Baptist Church, and worked for Independent Life after his service with the military. He lived in Deland, Florida, worked for the DOT until his retirement and moved back to the family home in North. He fought during WWII with the 69th Division of the Army and was stationed in France, Germany, Belgium and served during the Battle of Bulge as a mortar team leader. Survivors include his wife, Sarah Jo Bookhardt Thomas; a son, Henry B. (Ruth Ann) Thomas, III and daughter, Janie (Ross) Dickinson; nine grandchildren; four great-grandchildren and a number of nieces and nephews. He was predeceased by two brothers and six sisters. The family will receive friends from 3:00 PM until 5:00 PM, Sunday, August 2, 2015 at Culler-McAlhany Funeral Home in North (www.mcalhanyfuneralhome.com).

The family of Henry Berry Thomas Jr. created this Life Tributes page to make it easy to share your memories.

Send flowers to the Thomas family.