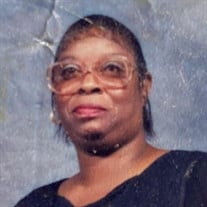 Norma Jean Baker was born February 25, 1951 to Daisy and David Henderson in Wilson, Arkansas. She moved to Memphis, Tennessee with her family while still a young child. She later moved to South Carolina and was married to Leroy Baker in 1996. Norma... View Obituary & Service Information

The family of Norma Rae Baker created this Life Tributes page to make it easy to share your memories.

Send flowers to the Baker family.